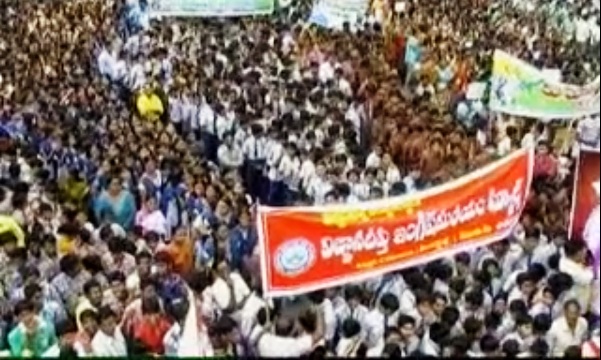 Imagine white people of the United States coming out in hordes in 1960s protesting and agitating against the Civil Rights Act that gave political freedom to the black people. It would indeed be the world’s ugliest movement because it is not a fight for their rights but to deny those rights to others. It is not a fight for freedom for themselves but to deny that freedom to others.

Luckily the world did not witness such an ugly movement. The whites of USA accepted the rights and freedoms given to the former slaves.

Unfortunately, one such ugly movement is taking place in the region called Seemandhra of Andhra Pradesh, India, where hundreds of Seemandhra people come out onto streets to roll back the achievements made by Telangana people after sixty years of their struggle.

These Seemandhras, fuelled by nostalgia, nourished by the absolute nonsensical idea that the state is actually a Telugu Mother who would be killed if cut into two, and armed with petty slogans like ‘United we stand; divided we fall’, have come onto streets protesting and agitating for over fifteen days now.

It is clear that Seemandhra protestors are only interested in continuing the use of Telangana as an internal colony to get their minerals, resources, jobs and their cities.

Ugly peoples’ movements aim for the exact opposite – they try to continue the oppression, suppression, marginalization and discrimination of weaker and minority societies.

When the Chinese people congregated in Tiananmen Square in 1989 to oppose their oppressive government with a desire to secure their rights and freedoms, the whole world celebrated their movement as justified expression of the common man against autocratic state.

Now imagine this – at a certain time in future the Chinese Government grants political autonomy to the Tibetans. If the same Chinese people come out onto the streets, protesting and agitating, forcing their oppressive government to roll back the political autonomy given to Tibetans so that their government continues the suppression of Tibetans, the world would decry, denounce and deride those protests and agitations as an unjustified expression of selfishness and hegemony.

Luckily, most populations on the planet do not come out onto streets to roll back freedoms granted to the marginalized people – they don’t come out to protest to deny rights to the oppressed people. Somehow they have a moral compass to know where they stand on such issues.

But Seemandhras do not seem to realize what their agitations and protests represent. The Samaikyandhra Movement launched by Seemandhras is a fight for securing selfish interests and preserving their superiority over people of Telangana. They want to keep the state united – in which there is no place for respecting or admitting the aspirations of people of Telangana.

Nobody seems to point out to Seemandhras how ridiculous, selfish, and greedy their slogans sound. They don’t seem to realize how hypocritical they sound when they say ‘unity is strength’ – because they were the ones who divided Madras State to form their own Andhra State in 1953. These protestors talk about preserving Telugu Jaati, not realizing that Telangana people reject this cultural imposition in which they were reduced to second class citizens. They don’t realize that two regions can remain united only if both of the parties agree – not when one of them disagrees. Imposing unity onto someone who doesn’t want to stay with you is coercion.

There was a movie in 1990s called Darr, in which the rejected lover continues to torment the woman even after she gets married to someone else, saying ‘Tu Haan Kar, Ya Na Kar, Tu hain meri Kiran’ [Whether you say YES or NO, you are still mine]. Today Seemandhras refuse to let go of Telangana no matter what.

People of Seemandhra have to realize this: Telanganas get stronger in their determination for separate statehood each time they hear your callous slogans, insouciant exhortations, and insensitive remarks.

The only way people of Seemandhras can continue to have Telangana in united Andhra Pradesh is through ruthless and brutal force, coercing every Telangana person to bend down and scrape on the ground. To keep us in control, the Seemandhra government has to put police in every house of Telanganas. They will have to construct world’s largest concentrations camps and ghettos.

The people of Telangana tell you this loud and clear: You may be able to have our land, our water and our resources, but not our souls.