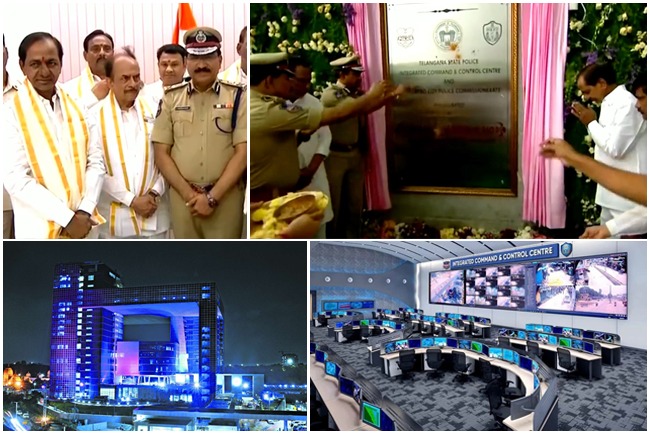 A first of its kind in the country for the police department, an ultra-modern building with all the latest gadgets and infrastructure was dedicated to the nation by the chief minister Mr K Chandrasekhar Rao here on Thursday.

Named Telangana State Integrated Command & Control Centre (CCC) located at Banjara Hills, Hyderabad will enable police to keep a vigil all over the state. The latest technology enables them to view one lakh Closed Circuit Cameras installed across the state.

Addressing the policemen on the occasion, the chief minister Mr KCR said the police towers will remain an invaluable asset to the department in the country. He hoped that it will help achieve good results and help effective policing in the state.

The chief minister instructed the police officials to invite the retired officers and take their feedback and learn from their experiences. He said the integrated services building was the idea of DGP Mr Mahender Reddy and credit goes to him. He thanked the executing agencies for their good work.

Mr KCR asked the police to eradicate the drug menace in the state. He praised them for ensuring peace and law & order for the past eight years in Telangana.

It may be noted that ever since the TRS came to power in Telangana in 2014, the government has been strengthening the police department by recruitment, providing new vehicles, and allocating funds to each police station among others. Now the CCC is a big boost to the department that not only helps improve their efficiency but makes them feel proud to be working in a corporate-like ambiance.

Mr KCR said the government would utilise the services of DGP Mr Mahender Reddy who is due for retirement in December.