Minister KTR keeps up his promise 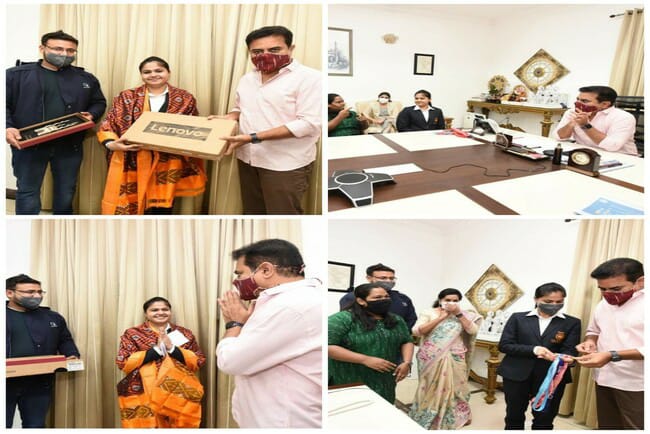 In his personal capacity, Minister KTR gives Rs 15 lakh cash and a computer as promised to deaf girl chess champion of Punjab state.

The Telangana IT minister and TRS senior leader Mr K T Rama Rao having learned about the hapless deaf girl from Punjab state who won many medals in chess competitions, promised to help her a few days ago.

On Monday, he met the sportsperson, Malika Handa, and her brother and handed over a cheque of Rs 15 lakh in his personal capacity, and also presented her with a laptop computer to hone her skills at chess.

It may be noted that the deaf girl Ms Malika Handa won six chess medals at the World and Asian championships. She also won medals at international Def Sports competitions bringing laurels to the country particularly to the Punjab state winning seven national championships.

However, when she sought financial help, the officials of Punjab state turned down her request stating that there was no such policy of encouraging or helping def sports in the state.

Having learned her plight, Telangana minister Mr K T Rama Rao pressed his personnel into service to find out details about the poor sportsperson and promised to help her in his own capacity.

On Monday, Malika Handa along with her brother met the minister at Hyderab and the Minister kept up his promise. People who came to know of his gesture have been showering their blessings and praises of Mr Rama Rao and sharing the news widely on all social media platforms.