About the essence of Hyderabad 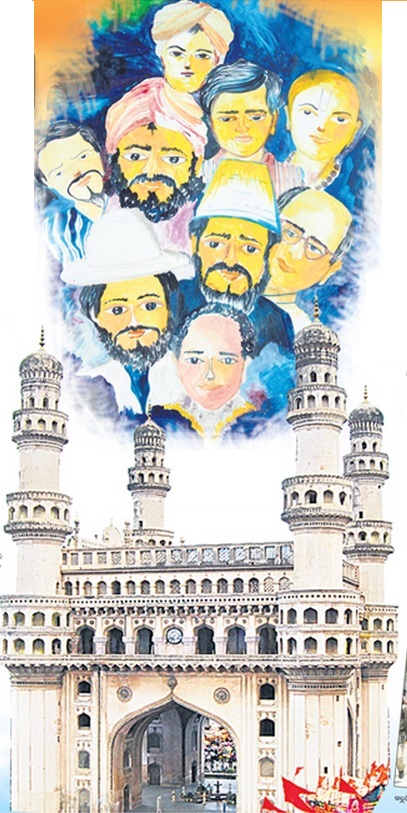 Hyderabad represents different things to different people. A seventy year old wood cutter, I met in a village in Warangal, told me, how it represented power, in his younger days. At the peak of feudalism, people living away from Hyderabad feared it, as being the centre, of the menacing power being used, to crush their rebellion. After the end of feudalism, Hyderabad was the epicentre for everyone with a non agrarian interest, to come and make it their home.

I try to go back, in time, into my childhood days in Hyderabad, and I can see empty streets, where we explored the various gullies of the city without any fear. Until many years, we could walk and enjoy, a good drench, in the rains.

Sankranthi meant the city’s skies were crowded, with kites of every colour, filling it and the shrill cries of ‘Kaate’, renting it. Deepavali was deafening, as different kinds of crackers exploded. Both the festivals were marked, by the way in which Muslims and Hindus, celebrated them, in equal fervour. My memory of Dasara takes me to the Hussain Sagar Lake at Tankbund, where my father took us to watch, the Bengalis take out the procession of Goddess Durga in trucks and they would be singing in Bengali, while they moved in a procession.

Bakrid and Ramzan was the time, when our bellies would be full of sheer khurma and the smells of Biryani wafted through the air. We went to a church on the Christmas Eve and looked forward to join, in the celebrations of a Christian friend or neighbour. My mother often went with our Muslim neighbours to Hindi movies, like ‘Mughal-e-Azam’, and they came back home and discussed the movie they saw, threadbare with each character, brought alive, once again, for us.

There were so many parks, in each street, that we were spoilt, for choice. Most of our doctors were General Practitioners and they belonged to the Kayasth community. When you went to them, you knew you, he was going to cure you of anything that you may be suffering from and they often charged according to the financial capability of the patient and more often than not, did not take anything from the poor.

The fabric of Hyderabad was so tightly inter woven, that we could live happily on meager incomes and still, always have, something, to give to others. This spirit of give and take is what sets Hyderabad apart and had kept it, welcoming and hospitable, for many migrants, who came to work here. It is the warmth of the people living in the city, that any city is remembered by and not, by how many malls, it has.

Hyderabad has never been a fanatic about anything; we spoke Hindi and Telugu with equal relish albeit with a unique dialect, of our own. Hyderabadi Hindi and Telangana were the two voices, of the same being and if somebody wants to make fun of it, that only means they wish to enjoy the goodness of it and yet, think of decimating, what is good in it.

IThat, there should be a thought, of sharing in what, others have to offer, rather than shoving what is yours, on the people living here. That you have to mingle like sugar in the water and add to the sweetness, of the existing culture rather than bandy about yours, as being the one and only and the best.

You say you are attached to Hyderabad emotionally, if the attachment is confined to the properties located here, no one will take the properties away, but by constantly harping upon imaginary insecurities, you are permanently scarring the people’s psyche, here. Properties will not cry for you, like you are crying for them, but our hearts will weep, for the hundred and one lies, that you are telling to assert your rights over Hyderabad.

You are the first migrants who have tried, to tailor the fabric of Hyderabad, to your interests and failed, miserably. If you had only become one of the threads in it, the fabric would have grown stronger, instead you wish to tear it up and turn it into a rag, just to vent your frustration, on what you think, is slipping out of your hands.

It is not too late, you are most welcome to stay here and so, are your properties. As I said your properties won’t cry, but our roads cry for repair, our monuments cry for attention while our lakes, our parks, even our graveyards, beg, to be left alone, by you.

Wherever you might be rebuilding your capital city, I am sure it will, shape into, what your thoughts and dreams, are for it. So dream big for it and we will wish, with all our heart, for your dreams to come true.

The essence of Hyderabad is always fragrant with warmth, kindness and a humane spirit and like its famed ‘Itthar’; it will continue to attract people to it.