What Did Rashid Alvi Say On Telangana?

The conspiracies of media on the Telangana movement seems to have no end. The latest controversy on Congress spokesperson Rashid Alvi’s purported comments on 2nd SRC, show how biased the media is behaving towards the Telangana statehood movement.

From yesterday, both Telugu and English media have been reporting that Rashid Alvi has said that even Telangana issue would be solved by appointing 2nd SRC.

The fact is, he never said those words. On the contrary, he clearly distinguished between Telangana and other statehood issues. 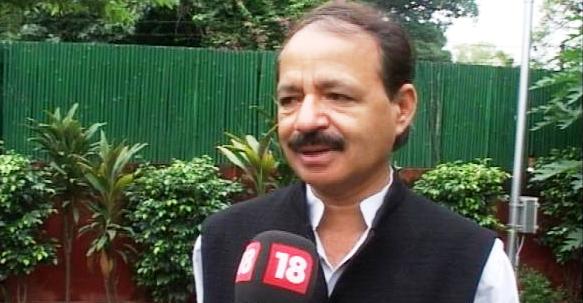 By IANS,
New Delhi : Amid reports that Uttar Pradesh Chief Minister Mayawati may push for reorganisation of the state ahead of the 2012 assembly polls, the Congress Tuesday said it favoured referring such demands to a States Reorganisation Commission.
Congress spokesperson Raashid Alvi said that a commission should be formed to look into all such demands.
“We have said in our manifesto and we are committed to it. We feel that a commission should be formed as the issue is not confined to Uttar Pradesh but questions are being raised all over the country,” Alvi said in response to questions on Mayawati’s plans for a four-way divison of the state.
Asked if the demand for separate state of Telangana should also be referred to the commission, Alvi said it was an “on-going issue” and questions on the subject should be addressed to Ghulam Nabi Azad, who is party incharge of Andhra Pradesh.
“It (Telangana) is a very sensitive and burning issue and already general secretary in charge is in touch with the Andhra leaders,” he said.
Congress general secretary Digvijay Singh also said that the party wanted the demand for a division of Uttar Pradesh to be referred to the States Reorganisation Commission.
There is speculation that Mayawati may pitch for four-way reorganisation of state into Harit Pradesh, central Uttar Pradesh, Bundelkhand and Poorvanchal ahead of assembly polls expected to take place within six months.
———————————————————
And now read how various anti-Telangana media misreported this:
1) TV9
The classic case is of TV9. In spite of having a video of Rashid Alvi’s comments, TV9 decided to go ahead with its blatant anti-Telangana propaganda. See it here:
http://www.youtube.com/watch?v=Vv_8IYPumxc
2) The Hindu
See this classic case of how a newspaper’s own agenda passes off as news. The Hindu correspondent J Balaji, not only misquotes Rashid Alvi, but has the gumption to use “quotation marks” for a sentence, which he has not spoken and use it as the headline.
Read this biased news article below:
——————————————————-
‘Telangana no exception to Congress policy’
J. BALAJI
SRC must look into the demand: party spokesman
As the momentum of the agitation for a separate Telangana in Andhra Pradesh is coming down, the Congress said on Wednesday that the demand for a Telangana state was no exception to the party’s policy that a State Reorganisation Commission should look into such demands nationwide.
‘SENSITIVE ISSUE’
However, since party general secretary in charge of Andhra Pradesh and Union Health Minister Ghulam Nabi Azad was looking into the “very sensitive and burning issue,” the question might be posed to him, spokesman Rashid Alvi told journalists here. He said Mr. Azad was in touch with leaders of the Telangana and Seemandhra regions.
Mr. Alvi, who was replying to questions about Uttar Pradesh Chief Minister Mayawati’s proposal to divide the State into four smaller units, said the party favoured the setting up of an SRC to look into such demands all over the country.
Asked whether Telangana was an exception, he said: “It is not an exception. I am talking about the policy for the whole country, and not about one region. The Telangana issue is already going on. The Congress general secretary in charge of Andhra Pradesh is already looking into the issue. You may pose this question to him.”
Mr. Alvi said the Congress would honour whatever it had said in its election manifesto.
“We want an SRC set up, as the issue is not limited to Uttar Pradesh. The Congress does not decide keeping in mind a region or the State but the whole country.”
Asked whether the SRC would also cover the Telangana issue, Mr. Alvi merely said: “It will cover the entire country.”