The division of employees between the two states has now snowballed in to a major controversy. It was inevitable, because, the crisis was brewing since a long time. The state of Andhra Pradesh was formed with certain specific conditions. In that the ‘mulki rules’ in employment and education was one of the major safeguards. But this was the rule which was most violated and had escalated in to 1969 Telangana agitation. At that time it was estimated that 25000 Telangana jobs were usurped by Andhras.

The Government issued G.O.No.36 to repatriate the illegal job holders. The illegals went to court. Supreme Court upheld ‘mulki rules’ and averred that the impugned rules are the fundamental right of Telangana people. The Andhras, however, did not digest it. The result of it was ‘Jai Andhra’ agitation. They demanded either scrapping of the judgment of Supreme Court and other safeguards, or bifurcation of Andhra Pradesh. The Government of India yielded to the pressure, and abrogated ‘mulki rules’ besides scrapping several safeguards by an act of Parliament. All irregular appointments were regularized, depriving local candidates of their rightful claim over those jobs. 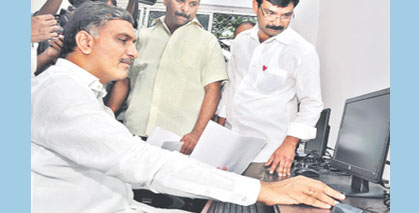 Finally, the so called Six-point formula, a diluted form of safeguards was foisted on Telangana people. Even this formula had been violated with impunity, robbing the people of Telangana of whatever little was left in the name of safeguards. Between 1973 and 1985 around fifty nine thousand andhras were recruited in Telangana region. The people of the region became once again restive and the government was compelled to issue G.O. 610 to rectify the situation —- to repatriate all non-local candidates illegally appointed in the Telangana region to their native zones and appoint local candidates in the resultant vacancies. The process was to be completed by the end of March 1986. But, since then, neither the G.O. has been implemented nor making illegal appointments stopped.

There was a deliberate inaction in the implementation of the GO. But, now in the state division, it has become inevitable to take cognizance of that. The allegations of Telangana employees are coming true. There are more seemandhra employees in secretariat, district, zonal and state cadres than the legitimate numbers. They have not only appropriated Telangana jobs with false nativity certificates but also grabbed many jobs in the open category via the notorious APSC. Thus it has created an incongruous situation where in there will be many Andhra employees in Telangana jobs in Telangana state. There are only a small number of legitimate Telangana employees in Andhra region. Now they are asking for options to come in to Telangana.

The exercise of option in the earlier new states was a different proposition. Because, those states were formed, either by dividing the mother states or merging parts of some states. There, the options were natural and worked well. But here as two states merged earlier are being divided, the situation is different. And there is a 6-point formula and its violation to contend with. Therefore the options alone are not appropriate here. Every employee in Telangana region has to be verified as to the legitimacy of the job based on the nativity. The back log of the repatriation of GO 610 and the new appointments or deputations are to be reviewed. The Andhra employees who are in Telangana jobs are to be identified and allotted to seemandhra. Their flippant arguments of humanitarian grounds do not hold water here. These employees and their Andhra administration have robbed the jobs of 2-3 generations of Telangana people and impacted their lives. Now their pleading humanity sounds weird.

The Andhra employees had enjoyed Telangana jobs illegally for years in the United State. Now their remaining in Telangana and asking to pay their salaries and pensions by Telangana government appears absurd. It is like ‘adding insult to injury’. In addition, they had indulged in the criminal action of fudging the documents and producing fraudulent certificates of nativity. The Andhra administration have supported this anarchy all along and now it is their responsibility to take them in to Andhra state or allow them to face prosecution.

Therefore, Andhra administration influencing Center and imposing these illegal employees on Telangana will not work. The Central government cannot formulate guide lines in a routine way, without taking in to account the unusual situation in Telangana. It will be a caricature of justice if an Andhra employee is allowed to work in a job belonging to Telangana citizen in the new state. That would be a sacrilege to the memory of 1600 martyrs who have sacrificed their lives for regaining that fundamental right to Telangana.
There are many such aberrations in the offing. It is time to say the obvious and set them right for a statesmanlike resolution. The old self-seeking shenanigans by seemandhras will only vitiate the environment.